Distance: 44 km from Bermagui to Tathra

As you head south of Bermagui, the trappings of civilisation become less and less – you will need a tent for the two nights of this stage, as you pass through the Biamanga and Mimosa Rock National Parks. Leaving Bermagui, you follow a walking track through lovely coastal forest, passing several lookouts such as Jerimbut Point, from where you get great views of the orange-tinted cliffs.The entrance to Baragoot Lake is crossed by the road bridge, before you enter a fragment of Biamanga National Park, preserving dense thickets of paperbark and banksias. The route emerges on to Baragoot Beach, which takes you to the mouth of Cuttagee Lake and a second road bridge. Continue on one of the few sections where the walk follows a sealed road (2 km) before taking a gravel road and walking track to secluded Armonds Beach - this is a designated nudist beach (the choice is yours). On the southern end of the beach, a track heads off before disappearing. For about 500m it is necessary to follow a compass or GPS bearing south across open ironbark forest to join up with another gravel road that brings you to the mouth of Murrah Lagoon. At low tide, a shallow wade takes you to Murrah Beach and, at its end, the green pastures of Goelan Head.

A walk across these pastures brings you to Bunga Beach, where you enter Mimosa Rocks National Park. A short way beyond, you reach a grassy clearing, with a tin fisherman’s hut, set above a small bay at the foot of Bunga Head – a lovely spot to spend some time. The track now turns inland, heading up into Hidden Valley before climbing up through the forest to cross a saddle behind the headland and then descend through lusher forest to Aragunnu Campground. A small detour to see Mimosa Rocks, for which the park is named, is worthwhile. 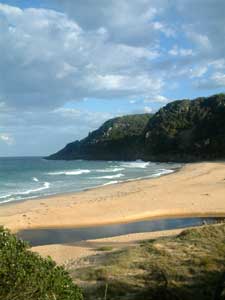 There are now two possible routes. The first is to head down Aragunnu Beach and pick your way around the rugged rocks and boulder jumbles at its end. This way, however, is eventually blocked by sea caves which will force you inland to navigate southwards through the thick scrub to eventually follow a creek back to the sandy beach and Picnic Point Campground. This is difficult and, at times, hazardous, so an alternative route is to follow the dirt access road out of Aragunnu and turn off to follow a fenceline between private property and National Park. This route across forest and paddock does cross some private land before reaching a road on the northern shore of Wapengo Lake that takes you to Picnic Point (NB this short section of the walk is one of the few which eventually needs new trackwork).

From Picnic Point, a walk through the open forest to its south brings you to Bithry Inlet which joins the ocean to Wapengo Lake. This is one crossing that requires a swim and should definitely be done at low tide. You land on the grounds of Myer House, a lovely old coastal homestead, now run by National Parks. A gravel road takes you from Myer House through the spotted gum forest, to Middle Lagoon. From here you follow the Middle and Gillards Beaches to the colourful cliffs of Baronta Head. A narrow gap behind the head takes you through to the tranquil waters of Nelson Lagoon – time for another wade or short swim.

From the lagoon you climb gradually up along the dirt access road before descending steeply on a footpath to secluded Moon Beach (the other nude swimming beach) and continuing on to Mogareeka Inlet, where the Bega River meets the sea. Here the crossing is made via the road bridge, where a short walk along a bike path brings you to the village of Tathra, its lovely old wharf and the end of the section.